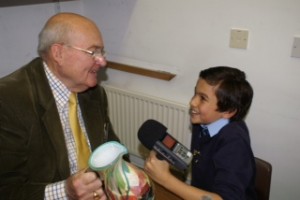 For the past couple of years, it has been my job to collect and record stories from the wonderful people who live and work in the Black Country. But this autumn, I’ve handed over the baton to a group of 10 year olds in a Stourbridge school. And judging by how good they are, I’ll soon be out of a job!

One of the aims of the Black Country Stories Project is to train a new generation of people to record oral history interviews. This year I decided to focus on the younger generation and over several weeks, taught two Year 6 classes the value of oral history and the skills to conduct their own interviews. They took to it with gusto and were soon interviewing with confidence. First they tackled their family and friends. For some children, it was the first time they had ever asked their grandparents about their jobs, where they worked, what they did and what had changed in the Black Country. One child wrote after his interview “I was so proud to ask granddad about his job”. Parents commented on how absorbed the children had been in the interviewing process.

Next came a bigger challenge; to record an interview with someone they didn’t know. More than a dozen local people were brave enough to come into school and share their stories on two glorious mornings in December. The result has been a fascinating archive of material about Stourbridge’s glass industry, all created by the youngsters themselves.

It has been a privilege to watch this project unfold; the interest of the children, the delight of the interviewees, the rapport between the two generations and the surprise of the teachers at how brilliantly the children have risen to the challenge of becoming oral history interviewers. I hope other Black Country schools will take up the challenge.