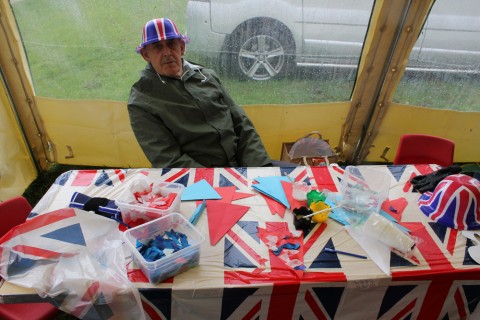 Martin spent the Jubilee with us in the Black Country attending as many street parties and community celebrations as possible before wondering off in the evening to a rave in The Civic! Continuing with our ongoing archive of life in the Black Country, 2012 is all about Wolverhampton and it’s satellite towns, so we focused the Jubilee shoot on events in areas of Bilston, Bradmore, Lea Road and Whitmore Reans among others.

Bilston Town Hall hosted hundreds of people from a drenched Sunday, all warm inside singing along to golden oldies banged out on the piano. The streets were deserted due to the torrential downpour, yet in Bradmore Recreation Ground ‘friends of the rec’ were determined to carry on and so they donned rainmacs and went under canvas with games, fairy cakes and trumpets. In Lea Road Church and Community Centre Jess from Colarado had organised an indoor feast and up in Whitmore Reans we found a busy gospel concert decorated in children’s handmade flags of everything but red, white and blue.

Monday morning saw clearer skies and so the street parties were on! We headed out to see several being set up and found other small gatherings en route! Starting off in Bilston on Station Road where the residents had been organising their party for months under the enthusiasm of the clear matriarch of the street, Denise, who doubles as local compere Deni Preston. The Seventh Day Adventist Church on Warwick Street had steel drums ringing out with dumplings and jerk chicken as they recycled Union Jack boxes into bunting. Up at Wolverhampton Cricket Club near Tettenhall the sun came out and the lawn was bedecked in neat tents with the finest cake stall of the day by gran, mum and grandaughter Mannings. Martin was spotted by a fan, Marion, who happened to have a photo of him when we attended the Danny Canon gig in Bilston last November, she passed on her copy! We finished the day with a street party in North Wolves on Hatton Crescent and met the marathon-runner Louise as well as an incredible wood-carver with a big dog called Bess and several other locals who said how lovely it was to be together for a day.

To round it off the Queen was in residence at Wolverhampton Premier Inn to bid us goodnight!