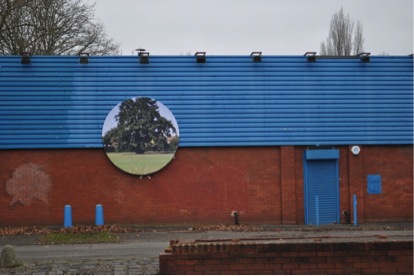 The two weeks between the second event in the park and the final gathering has been particularly busy as we complete on other aspects of the Stirchley Prospects Project. The consensus to invite ‘Title’ to make a new graffiti piece in the park means that we need either to gain permission from the Co-operative or get boards to make the work – and we need to check he’s available to take part in the final event.

The importance of having the activity take place in a focused way is crucial to people experiencing a change. The visual presence at the entrances – carpet and flags are easy to organize. The Co-operative area really interested in the project and keen to help and agree that we can make the new graffiti work. The visual statement on the front of Levines – the building that provides the visual block of the park from the busy Hazelwell Street is trickier. The image has sourced from the film made in the park last summer and the large circular image ordered ready to install temporarily on the front of Levines. Each member of the group is tasked with contributing to the event so we hope that we get a full complement on the day. New leaflets are made and we’ve distributed to the venues closest to the park – and put new ‘Pooch Parade’ notices in the park. These keep going missing or end up hidden in bushes – not quite sure if someone’s moving them or they just get blown down – but it makes it difficult to know who we are reaching! It snows on the interim weekend and we hope that it improves for the 12th