Over the last few weeks, we’ve been thinking about how we can respond to the Covid-19 pandemic and we’re producing a new digital programme called Stories in Isolation to support local artists and our Blast! Creative Network. We’ll be sharing their photography, poetry and film with you over the upcoming weeks that responds to the current situation.  Please keep checking this page as the project evolves weekly and follow #storiesinisolation on social media to keep up-to-date.

Poets Emma Purshouse and Steve Pottinger have written poetry that tells of everyday experiences in lockdown – including trying to get your 10,000 daily recommended steps in, and a night out on lockdown.

Emma Purshouse is a freelance writer and performance poet. She is a poetry slam champion and performs regularly at spoken word nights and festivals far and wide, often using her native Black Country dialect in her work. Emma has undertaken poetry residencies for Wolverhampton Libraries, The New Vic Theatre in Stoke-on-Trent and The International Festival of Glass in Stourbridge. In 2017 Emma won the ‘Making Waves’ international spoken word competition which was judged by Luke Wright. Her first novel was short-listed for the Mslexia unpublished novel prize. She was one of the writers chosen for the ‘Common People’ anthology of working class writing in 2019. Emma is currently the Poet Laureate for the City of Wolverhampton.

Steve Pottinger is a poet, author, and workshop facilitator, and a founding member of Wolverhampton arts collective Poets, Prattlers, and Pandemonialists. He’s an engaging and accomplished performer whose work has appeared in magazines and anthologies, and he’s a regular contributor to online poetry platforms. He’s performed at Ledbury and StAnza poetry festivals, at the Edinburgh Free Fringe, and in venues the length and breadth of the country, from Penzance up to Orkney. His sixth volume of poems, ‘thirty-one small acts of love and resistance’ published by Ignite Books, is on sale now.

Mark Murphy is an artist who works with collage. During the past eight years, alongside his design practice, Mark has enjoyed setting himself the challenge of making collage in a purely analogue way. Seeking out weird and wonderful print from the last 60 years his hand-cut, paper collages play with graphic composition, juxtaposition, space, scale and surrealism. Sometimes abstract, sometimes figurative, often humorous.

For Stories in Isolation Mark has created a three-minute film about his approach to collage, whilst working on a new piece called ‘Holding On.’ The title seems to capture the mood for many during Covid-19 and as Mark reminds us, ‘there are plenty of people everywhere currently missing the embrace of friends and loved ones.’

Thea Brown grew up in Telford and spent much of her childhood involved with Telford Community Arts. She received her art training in Liverpool, Sheffield and Birmingham. Thea uses a variety of media – drawing, photography, performance and installation – to explore elements of femininity, hope and desire. She is currently based in Tipton and is Head of Art at a secondary school in West Bromwich.

‘Tipton Meshes’, is a performative reflection that captures traces of isolation in the domestic space. Collaborating with artist and filmmaker, Joseph Potts, the experimental film portrays the contradictory feelings in isolation. The photomontages accompanied by text echo the three-minute film’s psychological journey of loneliness, emotional freedom and the desire for human connection. Watch the full film on our youtube below, and see the photomontages and accompanying text via our Instagram.

⁣Catherine Turner is a photographer and designer based in Rowley Regis, West Midlands. Focussing on street and documentary photography, Catherine’s work shares poignant snapshots of daily life and family stories in the Black Country and beyond.⁣⁣

We invited Catherine Turner to share ‘Oldbury Rep’, a new body of work for Stories in Isolation, and to go back to actors who feature in the photographic series to find out how they’re coping in lockdown. Oldbury Rep was established in 1939 and is Sandwell’s only purpose-built theatre. Run entirely by volunteers, the theatre produces multiple plays each year and provides a source of entertainment as well as a lifeline for the local community and its team of dedicated members. Having spent 2019 documenting the theatre’s performers and back stage team, Catherin now wonders how the current closure during the Covid-19 pandemic is effecting not only the future of the theatre, but the wellbeing of its’ members, many of whom dedicate hours and hours of their time to keep the threatre alive.

To see the rest of Catherine’s work, see the ‘Oldbury Rep’ gallery on this project page. 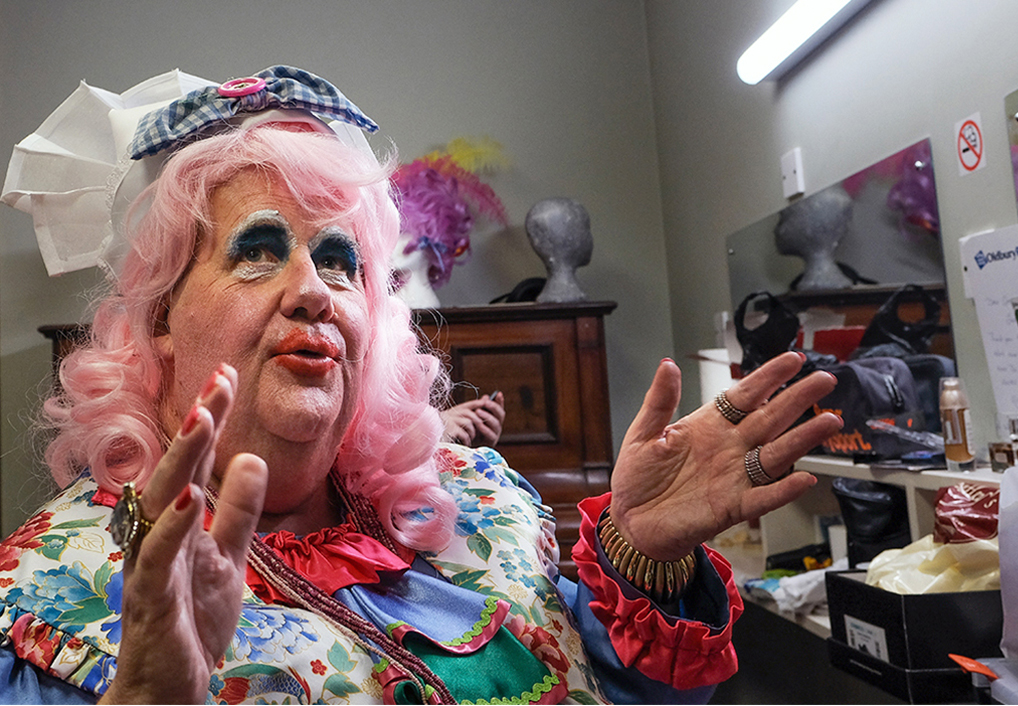 Bhulla Beghal is a professional filmmaker from Smethwick. Having grown up amongst a manufacturing environment, making was deep-seated early on. Highlights from working in production include being a cinematographer for a feature documentary in Abu Dhabi and leading the art department for a documentary on the Suffragettes. Bhulla’s short animation on domestic abuse around children, A Scribbled Memory, has had a successful tour in UK film festivals picking up multiple awards along the way. His campaign for Deaf Awareness Week, which brought together organisations to create films in BSL, earned a Community Engagement award by the West Midlands Fire Service as well as becoming a finalist for a Campaign for the Future award from Signature Deaf. Bhulla now runs BlueBell Films, a documentary production company. A notable project has been a documentary on the lack of service uptake amongst the South Asian community for palliative care services.⁣

For Stories in Isolation, Bhulla made a short poem film called ‘Home Time’. Sweet and humorous, the short film tells the story of a boy’s musings on school, now that he can no longer attend due to lockdown. The film features Bhulla’s nephew Avian, age 8. Jaya, his niece, age 10 supported on production.

Herbert Walters is a Birmingham based documentary photographer who completed his HND at Sandwell College followed by a degree at Birmingham City University, where he became an artist in residence.  He recently presented his exhibition ‘Vision of Moments’ at the Medicine Bakery & Gallery in Birmingham city centre and has shown his work at Heart Break Gallery, New York; SOAS University, London; Midlands Arts Centre; and The Drum Arts Centre, Birmingham.

Herbert’s Stories in Isolation project, ‘Where People Once Gathered’ documents empty spaces around Birmingham through a series of photographs that were taken during lockdown in March and April 2020. Waking up at 4am to venture into the city on foot, Herbert photographed buildings, roads, parks and New Street station, capturing the eerie quietness and abandonment of a city at standstill, where no people, cars or animals could be found.

“It was so strange to walk through the empty streets, it felt like Birmingham belonged to me, like I had the keys to the city.” Herbert Walters

You can view the photographs via the gallery at the top right of this page, or via our instagram account. 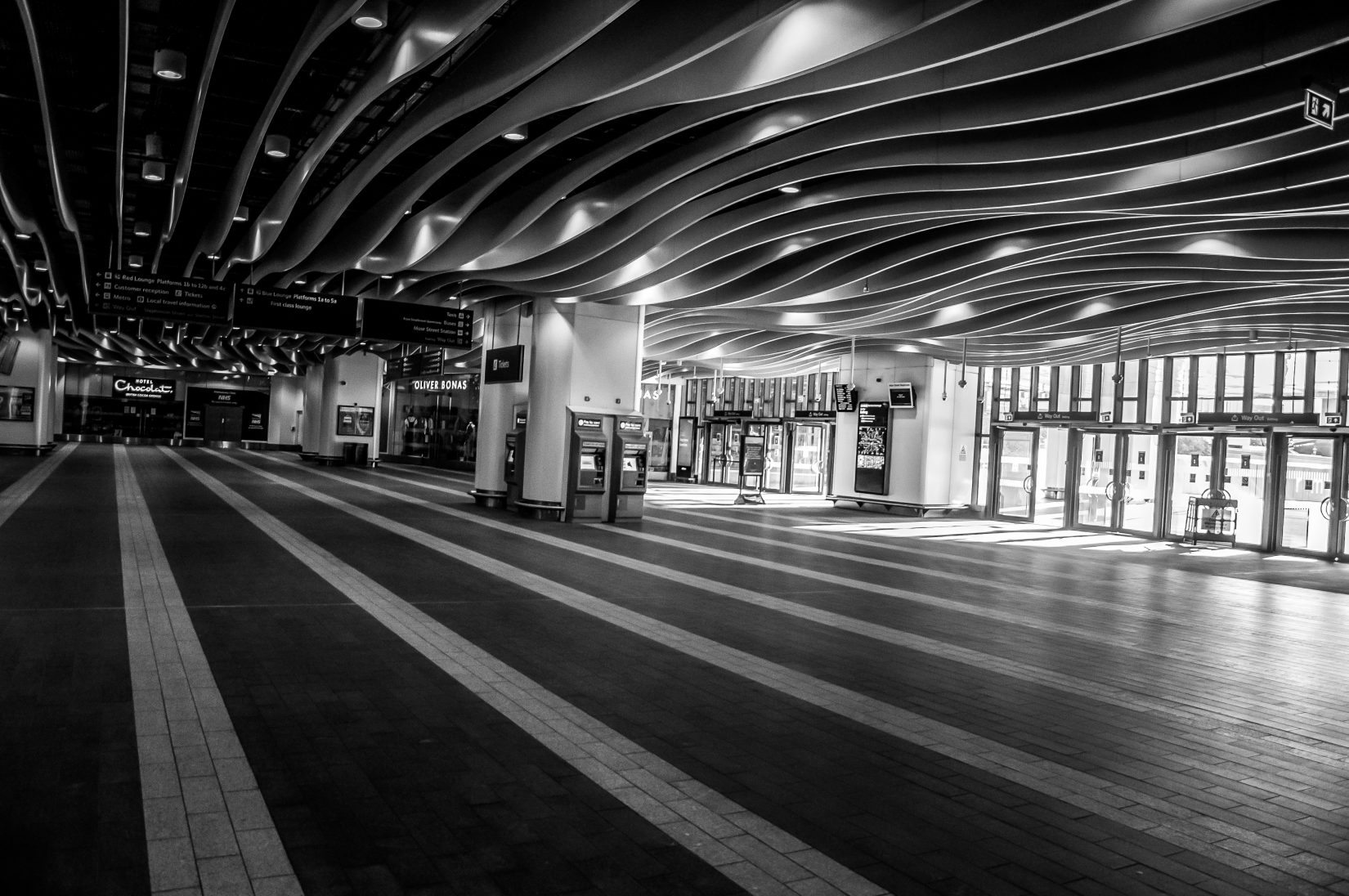