Welcome to Seeing in Isolation, a new digital exhibition from Multistory and photographer Karren Visser that shares digital stories made with, and told by, visually impaired Sandwell residents.  The project brings together members of Sandwell Visually Impaired (SVI) to share their stories through short digital films made up of audio recordings, photographs from family albums, music and animation and aims to challenge people’s understanding of sight loss.

Below are seven films that include: an introduction by the photographer, Karren Visser, and six Digital Stories by Craig, Helen, Jean, Michal, Perm and Rickie. The stories are between 4 to 9 minutes long and they have embedded audio-description narrated by the person telling their story. We recommend watching the introduction first and then browsing the rest of the content.

Photographs taken by Karren Visser and stories from other participants involved in the project can be found below the Digital Stories and behind-the-scenes photographs can be found in the galleries section.

If you would like more information about the process of making this project, please read our blog here.

Karren Visser is a photographer who is constantly adapting her practice because of the possibility of her going blind due to degenerative myopia and glaucoma. She is interested in approaches to gathering stories so that individuals and communities are instrumental in this process and its outcome.

Sandwell Visually Impaired (SVI) is a user-led, not for profit, charitable incorporated organisation (CIO). They aim to make living in Sandwell better for people with sight loss.

Trish says: ‘Archery brings a sense of freedom because I would never had thought in a million years that I could hit a target, at all. It’s brilliant!  Over lockdown, I have missed that feeling of being able to let fly’.

Gina says: ‘Tony was such an amazing person in so many ways. He loved life. He loved people and that’s how he became involved with SVI. I named it his second family because it brought him happiness. They were so encouraging and, in 2014 when he passed away very unexpectedly, there was a great feeling of sadness within the organisation, and I can’t think of anybody who knew him who didn’t come to his funeral.  Even after Tony passed, SVI looked after me and that is why I want to carry on where Tony sadly left off. I too get great joy out of doing things with SVI, helping out with fundraising, even just helping by making a cup of tea and a piece of toast for the members’.

Dan and Joanne with their dogs. Photographs provided by Dan and Joanne. Seeing in Isolation, produced by Multistory and Karren Visser, 2021.

Dan: ‘When I wanted to use my cane, you decided that it would probably be best for me to go for a dog, didn’t you? How did you come to that decision?’

Dan: ‘Yeah, people don’t give you the same level of respect as people who have got a dog’.

Mike says: ‘I enjoy photography. When I take photographs, my interpretation of that picture is going to be different to a fully sighted person’s even though it is the same image’.

Graham says: ‘I feel very strongly as a person with an impairment that I have a capability and capacity to make a difference. I’ve got to do my bit to shape what happens for us as people living with impairments’.

Photo caption: Ian with his Dad and children on match day. Photograph provided by Ian. Seeing in Isolation, produced by Multistory and Karren Visser, 2021.

Ian says: ‘I first went up the Albion really in the early seventies, me and my Dad. It’s somewhere me and my Dad always went, something that we’ve always done, so it was a natural progression when my kids came along. Samantha’s been up, Adam’s been up, Liam’s been up. It’s just good, come match day, when we all get ready and we all go to the game and mingle with the crowd. It ain’t quite the same for me these days if I’m honest. But the Albion are quite good because I get reduced price on my tickets and I get carers’ tickets. If I phone up and let them know that I’m going they give me a headset so I can listen to the commentary. It’s just good to be there. Long may it continue, to be honest, through thick and thin. That’s the joys of going to watch the Albion’.

Terry says: ‘My problem is, although I have a bit of sight in my left eye, I have none in my right eye, so as people come across me they are invisible until they are right in front of me. The video tried to show this.

When I’m moving my cane, I sweep more to the right because that’s the side I can’t see. The students put the camera down low as I was walking and tried to emulate that shot.’

Steve says: ‘After I left school, my eyes continued to haemorrhage but, while I was working, I didn’t go back to the hospital because I didn’t want to have time off work. Luckily enough they never haemorrhaged in the same eye so I just used to carry on working with me one eye gone.

I was working machinery, capstans and that and, all of a sudden, I would get squiggles in front of me eye and straight away I would know what was happening. I just used to walk away from the machine, go down to the toilet, sit on the toilet and sort of try and contemplate, thinking ‘well me eyes are going again’. I could sort of see blood floating about, then I used to just go back to the machine and start work again and just use me other eye’.

Wednesday 30 June 2021, 6 to 8pm
Do you need to have sight to photograph? This question will be explored at an online event that brings together international blind and visually impaired photographers: Bruce Hall, Karren Visser, Mickel Smithen, Pete Eckert and Sonia Soberats to present their work and be in conversation with curator Douglas McCulloh of exhibition Sight Unseen: International Photography by Blind Artists. To book your tickets via Eventbrite click here or email info@multistory.org.uk with your name, how many people will be attending and postcode. 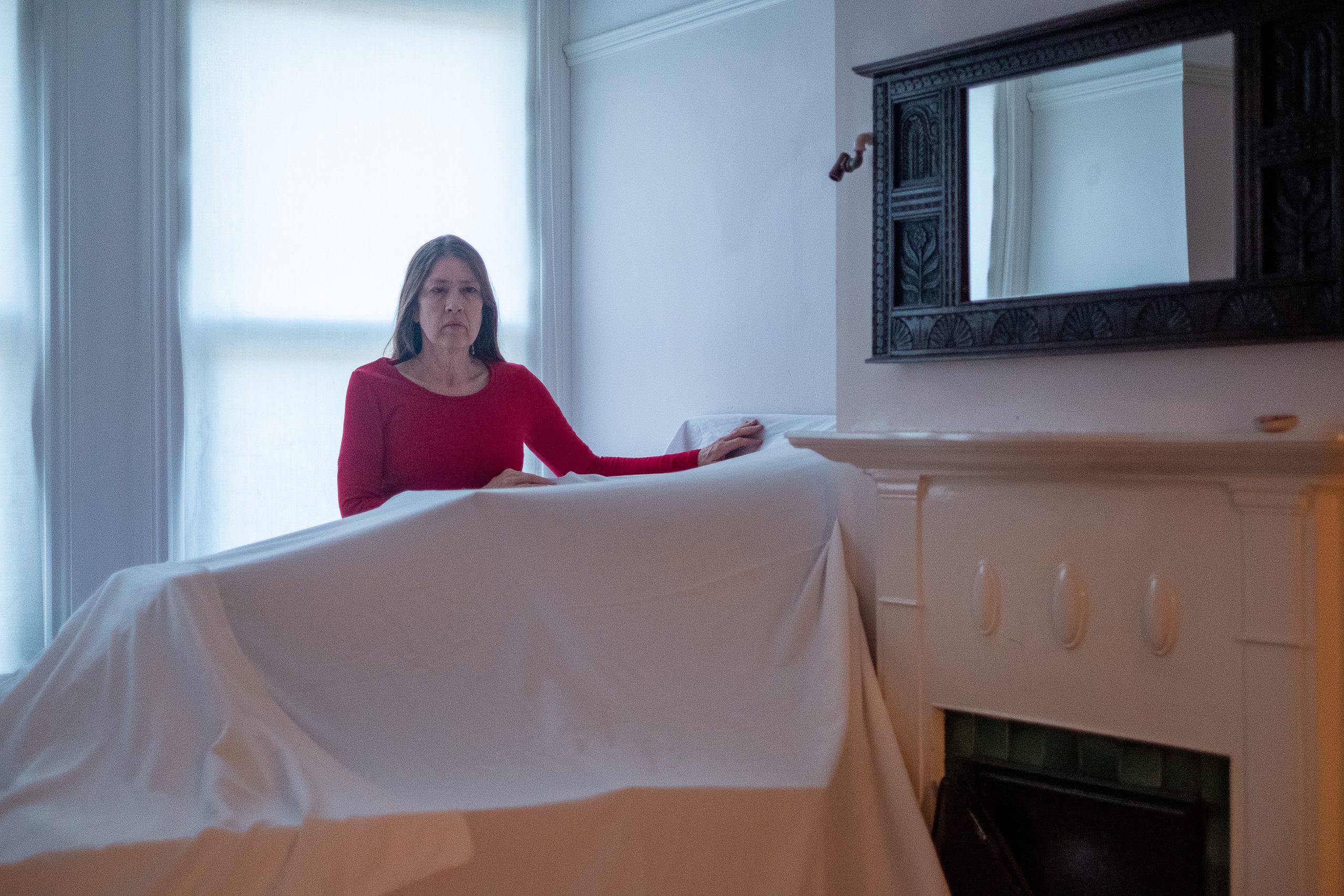 Whilst working on ‘Seeing in Isolation’, for the first time, photographer Karren Visser created self-portraits and audio recordings about her own experience that reflected this sense of increasing isolation.

Behind the scenes images from the project Seeing in Isolation.