Multistory has had an amazing year, filled with exciting new commissions, projects, events and our very first festival! Blast! Festival of Photography, Talks and Walks (funded through the ACE Ambition for Excellence Fund), ran for six weeks in the six towns of Sandwell.

It’s been a fantastic journey, and we’re looking forward to what next year will bring.  In the mean time, we’ve put together a list of this year’s highlights for you to read during the festive period.

Wishing you all a very Happy New Year!

We’re excited to finish our fantastic year by sharing our Blast! highlights film with you to give a snapshot of the great energy and diversity of exhibitions and events that took place throughout the festival.

Blast! Festival invited 40 international and local artists, photographers and curators to showcase work, develop projects and collaborate with communities to present stories about every day life.  The festival was produced with and for local people and attracted over 47,000 visitors to exhibitions, workshops, film screenings, events, talks and public walks, taking place on the streets, the Metro line, in shops, libraries, pubs, historic buildings and community halls.

The programme included 18 new commissions, with 12 of those specifically for West Midlands based artists and curators as part of the Forge Programme.   We’ve already started planning the next one in 2022, so get the date in your diary! Here are some of the highlights.

Comeback is a two-part project by Erik Kessels which re-appropriates photographic archives found when Erik met with community groups in the Sandwell area. Tipton Carnival Queens Shine Again presented images of former carnival beauty queens in an installation in the West Bromwich Town Hall and Tipton Community Centre. This was the most ambitious project in terms of production and scale, turning West Bromwich Town Hall into a celebration of the Carnival Queens for six weeks.  A big attraction of using the Town Hall as an exhibition space is that it’s a public space that gets used by a wide range of different people, from tea dancers to blood donors.

At the heart of Blast! Festival was the Sandwell Pride of Place exhibition: artists Jan Williams and Chris Teasdale of The Caravan Gallery turned an empty shop space into a temporary exhibition / alternative visitor centre.  Co-created with Sandwell residents, the exhibition invited the community to contribute to the exhibition with their own words and images.  The exhibition culminated in an alternative, local perspective on Sandwell, growing daily as visitors added to the artwork and ephemera on display, shared stories and made a mark on The People’s Map of Sandwell. Click here to see the exhibition featured on BBC West Midlands. 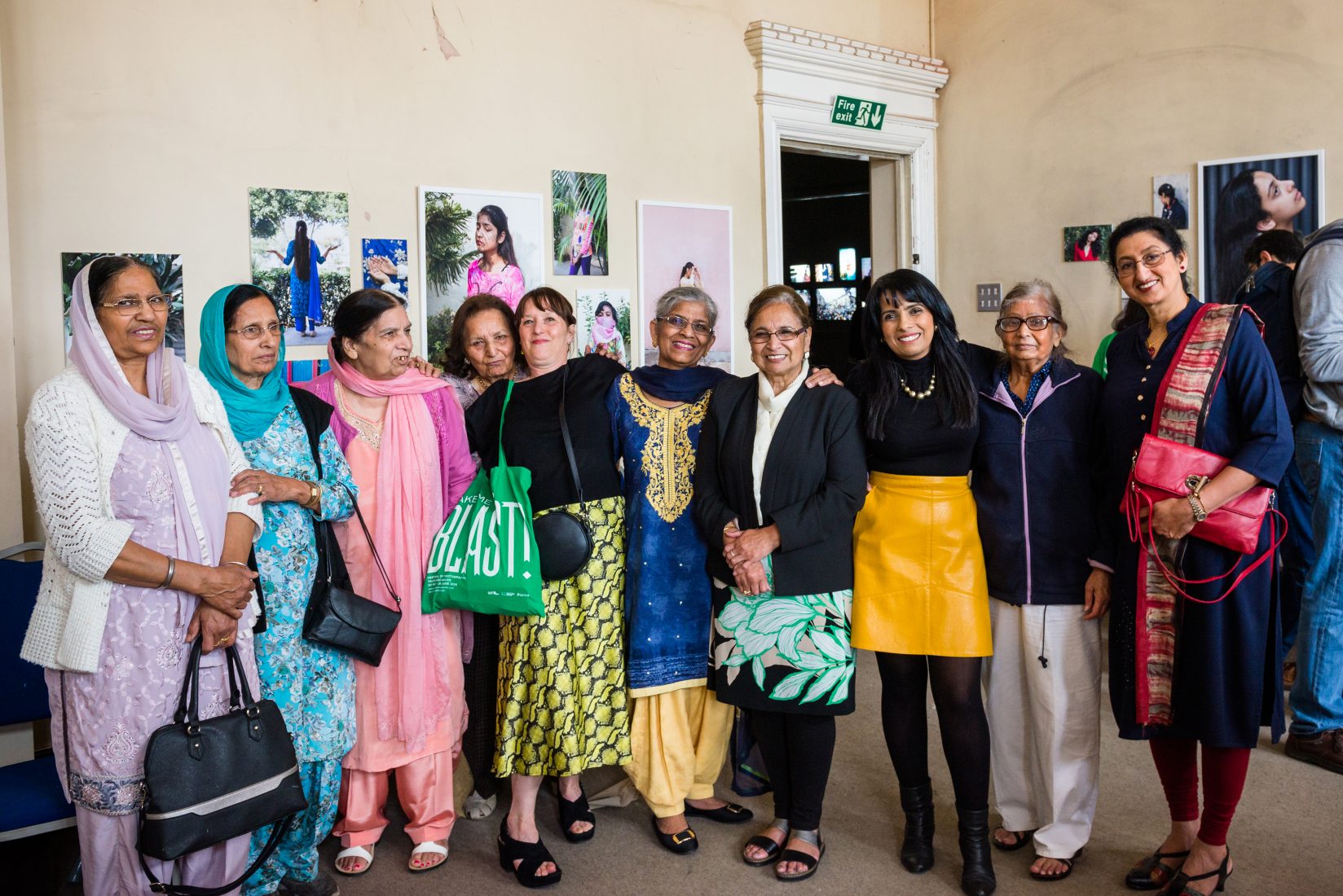 Dawinder Bansal’s film and installation Asian Women & Cars: Road to Independence celebrated the lives and experiences of first generation South Asian migrant women living in Sandwell and the Black Country.  Using oral histories and photographs, the film explores the relationships between the women, driving and their cars. This project won the Creative Media Award at the Asian Media Awards, 2019.

Billy Dosanjh’s project The Exiles recreated a scene from the 60s and 70s, a time when thousands of male economic migrants arrived in the blue-collar region of Sandwell.  The Exiles is an ongoing project that searches for meaning in these men’s futures. Click here for a ‘behind the scenes’ film. 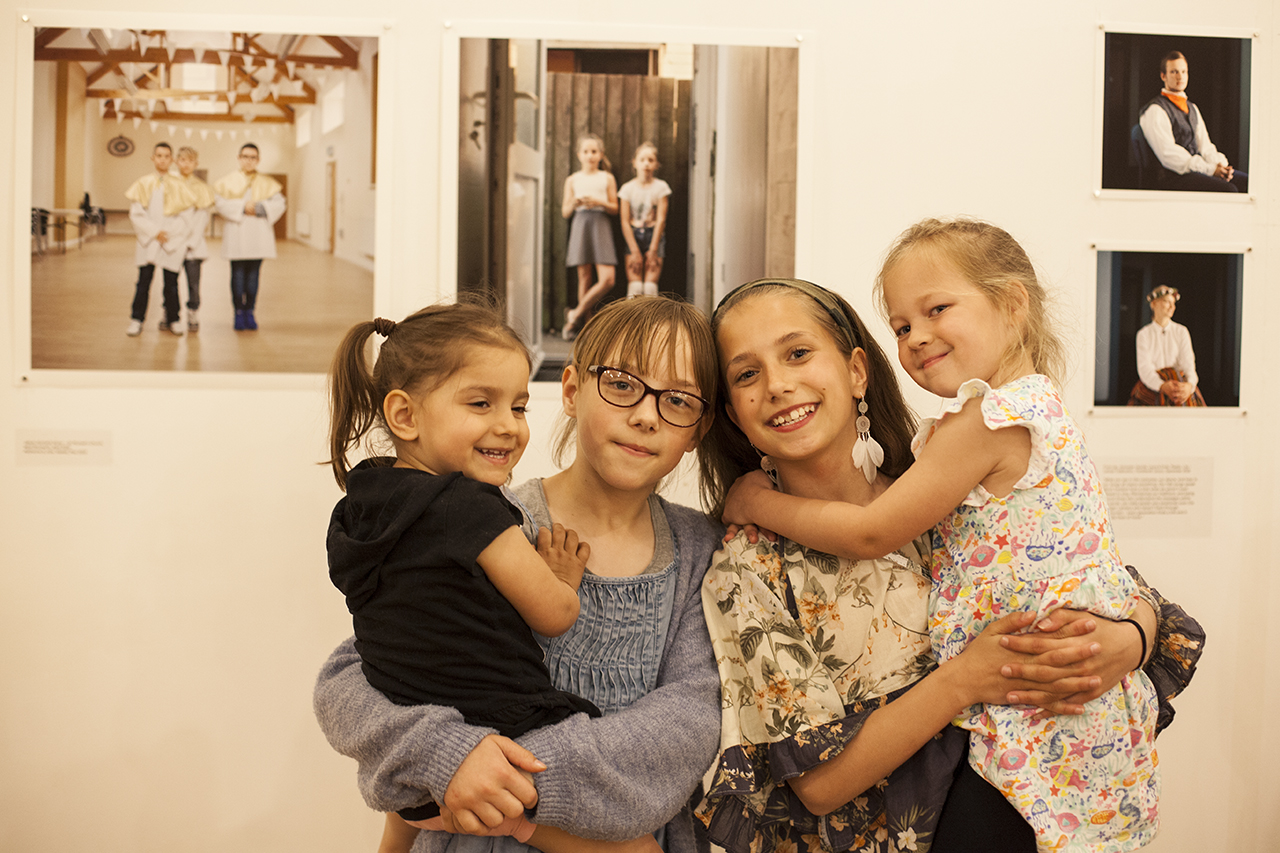 Jon Tonks’ exhibition Stories of Home is a portrait of the Central and Eastern European communities living in Sandwell, home to the biggest Polish population in the UK. The photographs document and celebrate the everyday aspects of people’s lives – at work or home, at school or a celebration. The work was shown alongside Czesław Siegieda’s photographs – exhibited for the very first time – of the Polish community in the Midlands in the 1980s, including portraits of his family; a community displaced by war and unable to return to their homeland.

At Lightwoods House, Jaskirt Boora’s Mitti di Khushboo: The Smell of the Land showed intimate portraits of her family members alongside handwritten accounts of their stories of being born in India and migrating to England, and the work they put in to making a life for their families.

For his Forge Programme commission, Stephen Burke set out to create a portrait of West Bromwich by focusing on the fans of the football club. He was clear that this wasn’t about football but about the community that comes from being a fan of the sport – dedicated to that team and to that place. He produced an exhibition of 52 prints of West Bromwich Albion fans, accompanied by an audio work (16 minutes) that combined interviews with fans and live recordings from the ground. The work was exhibited at The Vine, a West Bromwich pub popular with Albion fans. Read more about the Forge Artists here.

Huge thanks to our partners, everyone who attended, participated  and who gave their support in Blast! including Sandwell Council and the Arts Council of England through its Ambition for Excellence Fund.  Visit the official Blast! website for more info or click here for photos. 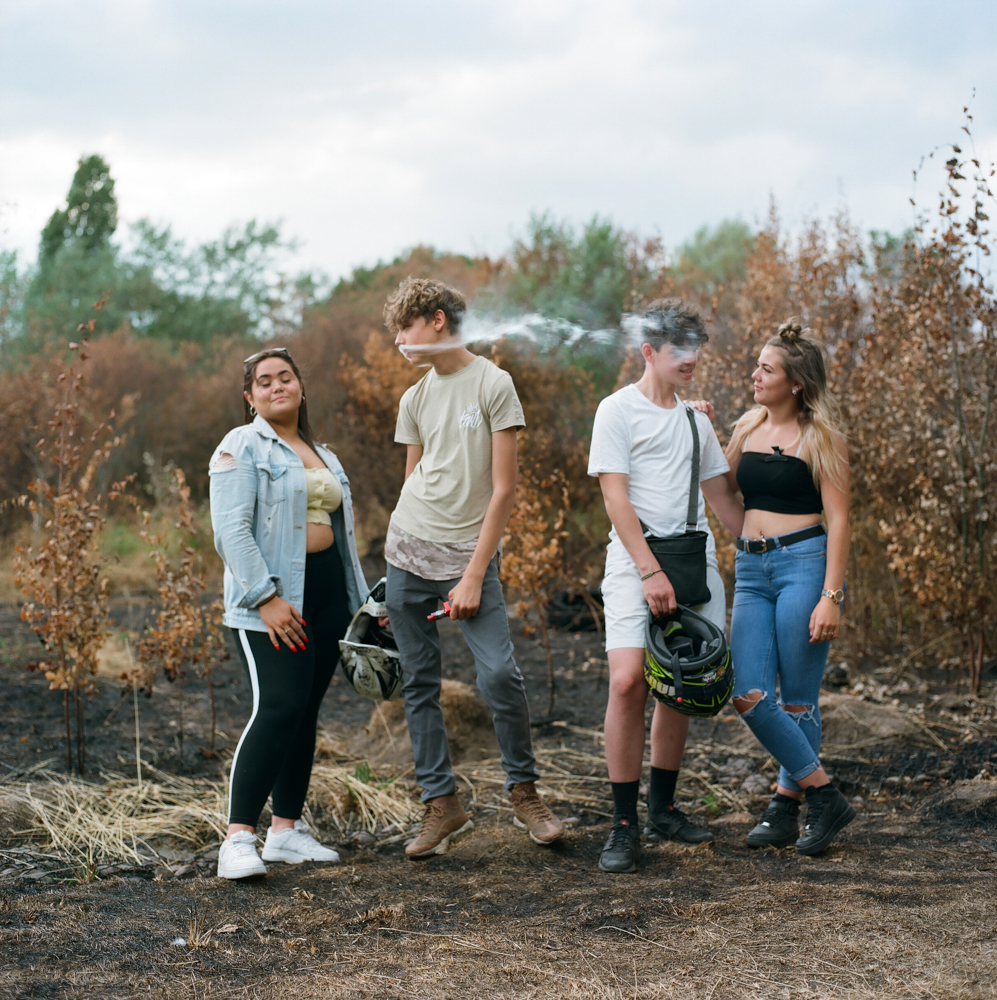 The Cracker is a photographic series of portraits of teenagers living in Tipton between 2018 and early 2019.   Photographer Laura Pannack was drawn to the area’s tight knit community and she continued to return over the period of one year, to meet people, photograph and run workshops. ‘The cracker’, as it’s referred to locally, is a youth club without walls and without rules and is where Laura met and photographed the teenagers. Through her photographs, she explores the friendships, the unique language and tradition of the area.

The work was presented on 31 May 2019, in an outdoor screening at a special event for local residents in Tipton, in collaboration with Sandwell Youth Service, with a BBQ, music and kids’ activities.

In 2018, artist Sarah Taylor Silverwood invited people from the six towns of Sandwell to nominate women who they thought deserved to be honoured and celebrated.  2018 was the centenary of the women’s vote in the UK, yet powerful movements such as ‘Me Too’ and ‘Times Up’ emphasise that equality is not a given, but something we need to fight for.  The nominated women had many things in common: they went above and beyond; they often worked behind the scenes; they were strong supporters of families and communities; and were volunteers or carers. Three winners were selected by the judging panel of local women to have their portrait drawn by Sarah Taylor Silverwood.  The resulting portraits are a collaboration between Sarah and the winners.

We announced the winners – Bally Barquer, Leonie Hart and Barbara Platts – during a celebratory event on 24 January, when the three of them and other nominees came together with their friends and family.  Bally, Leonie and Barbara were presented with framed, hand-drawn portraits of themselves that were also printed for the civic building exhibition that will tour in 2020.

This year our pop-up exhibitions Sandwell Stories and Estate Return were presented in public libraries across Sandwell.  Robert Clayton’s exhibition Estate Return was first exhibited at Rounds Green Library on the Lion Farm Estate for Blast! Festival, alongside the launch of a free publication of his photographs.  At Oldbury library, in November, we hosted an artist talk by Robert followed by a screening of his 2015 film ‘Estate’, and an open conversation with Robert, residents of Lion Farm Estate, a representative from Accord Housing and the public.  The discussion explored the work’s social implications and the need for social housing and community.

As part of the Estate Return programme, artist Annabel Duggleby led a zine-making workshop with local children that explored home, community and the environment.  The children used collage and drawing to create zines about their local area and think about ways they could improve their community.  Inspired by recent youth-led environmental action, the creative workshop helped the children to think about how they can shape their world and take an active approach to civic change.

First presented at West Bromwich Central Library during Blast! Festival 2019, the exhibition Sandwell Stories showcases portraits by photographer Emma Case, taken while she interviewed local people for Multistory’s ongoing oral history project.  The exhibition weaves together the words of people from Sandwell with their portraits, enabling the public to access a growing oral and visual archive of contemporary, everyday stories.  Keep an eye out for upcoming events in 2020, as part of our public engagement programme. 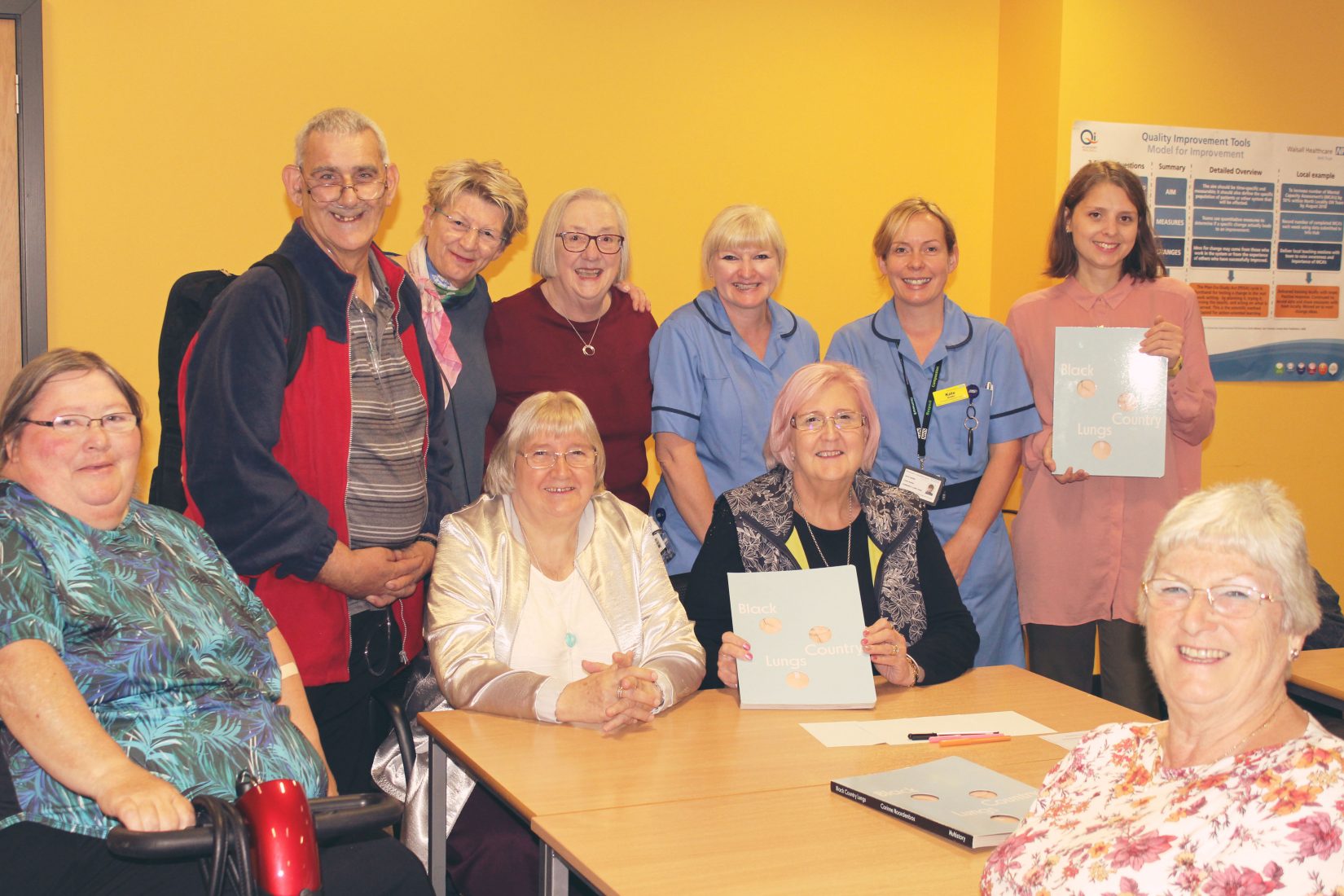 Dr Matonhodze, Respiratory Consultant at Walsall Manor Hospital invited us to present the exhibition Black Country Lungs by Corinne Noordenbos at the hospital and organise a coffee morning and symposium that explored what cross-disciplinary collaborations between artists, researchers and scientists can contribute to our understanding of the human condition.  Statistics show that Sandwell and the Black Country have more health-related problems than other areas of the UK, and Corinne used this as a starting point for her project.  Black Country Lungs is a photographic exhibition and a book that tells the stories of people living with Chronic Obstructive Pulmonary Disease (COPD) in Walsall and the Black Country through photographs and first-hand testimonies. 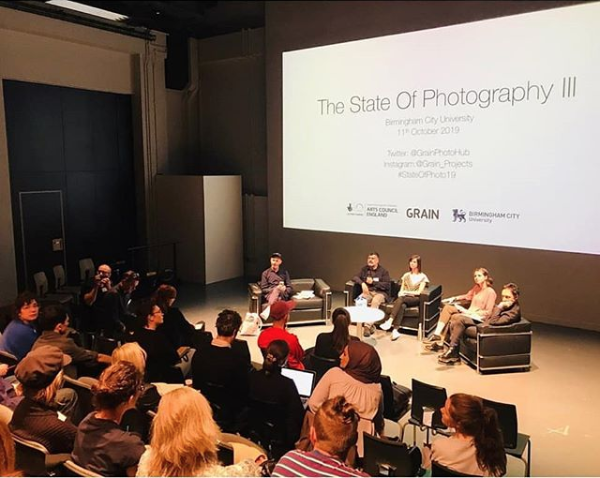 Multistory has been invited to speak at a range of public presentations around photography and social practice, to give an insight into our work with communities.  Project Manager, Becky Sexton, spoke at ‘The State of Photography III’ panel with GRAIN Projects, to discuss socially engaged photography and working with communities; and she joined a panel discussion at the launch of ‘Perspectives’, a new publication launched by the Social Change Initiative in Belfast.

Just this month, Director, Emma Chetcuti, presented Multistory’s work at the Royal Photographic Society’s Photography Ethics Symposium, which explored why we photograph and how we engage in processes of representation. A summary of the event from the Photo Ethics Centre can be found here.

Roy, who shared his story as part of our book and exhibition Out of the Shadows: the untold story of people with autism or learning disabilities by Polly Braden and Sally Williams, was invited to speak about his experiences of the criminal justice system at ‘A Fair Hearing Conference’ organised by Leigh Day. He also spoke about the positive impact taking part in this project had. The conference heard from people with a learning disability and / or autism, as well as relatives and supporters and a selection of photographs from Out of the Shadows were also exhibited.

Thanks for reading. We look forward to sharing more projects, events and opportunities in 2020.