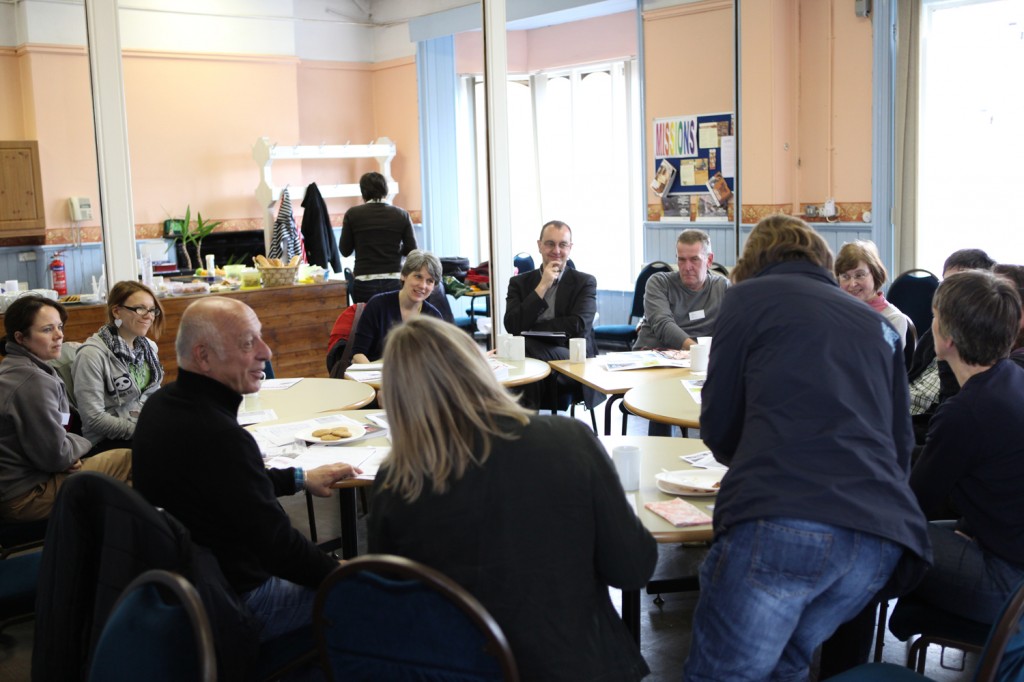 In June 2012, The Small Change Forum brought together 15 people including local residents of Stirchley along with professionals from the public and private sectors.

Participants considered the strategic aims and practical next steps for progressing a number of creative community improvement proposals as developed by Place Prospectors – a community interest group directed by Emma Larkinson and Jayne Murray – during their 9 month residency in the neighbourhood during 2011/2012.

This event followed on from the Small Change: Shaping Stirchley event which took place in February 2012. It used community action planning techniques to explore Place Prospector’s community improvement ideas. Important to this process was uncovering with local residents the existing resources, skills and knowledge which could be mobilised to bring about positive change in the community. The day concluded with practical next steps so as to turn ideas into actions.

The Stirchley event used community action planning (CAP) tools and techniques to develop a series of community improvement proposals based on the creative work of Place Prospectors. Used all over the world, CAP is widely recognised as an effective way of working with diverse groups of people to understand what they want for their community. The technique includes a series of sequential steps coupled with participatory techniques including mapping, art activities, design workshops, community profiling, model making, neighbourhood walks and photo surveys; all of which are aimed at gathering information about a place and people so as to make informed and collective decisions for change. Outlined below are the standard CAP steps with comments relating to the work in Stirchley:

Step 1: Identify what has been done so far

This explored in theory and practice the creative interventions Place Prospectors devised and implemented in Stirchley.

Step 2: Investigate what we want to do next

This step includes understanding the aspirations and priorities of local people for their neighbourhood. Based on this information one can identify the project purpose, objectives and activities to bring about the change.

Step 3: Understand what/who will get in the way of achieving this goals

The constraints can be themed such as institutional, financial, political, technological, environmental constraints etc.

Step 4: Identify what resources are required to achieve the goals

In response to the identified constraints, you can identify what is needed in terms of resources (space, money, skills, etc.), capacities, partners and management.

This step creates a series of activities, actions and roles need to achieve the project goals.
CAP Step 1: What have we done so far in Stirchley?

PP’s Emma Larkinson and Jayne Murray provided an overview of their creative work in Stirchley including occupying an empty shop on the high street called Stirchley Prospects. PP’s overall aim was to use the arts and creative cultural interventions as a catalyst for identifying opportunities and challenges in the area with the intention of making lasting improvements. During their 9 months residency PP carried out the following:

Based on these activities PP developed the following community improvement proposals:

CAP Step 2: What do we want to do next in Stirchley?

With the seven proposals identified, the next step was to explore what binds these projects together. This process helped in developing an overall vision for the project and also understanding what organisational structure and additional stakeholders are needed. Localism and plans for devolving public services in the community were highlighted by the group. A decision was made to explore these further with the local authority.

Aspirations for Stirchley were explored with individuals and the group. This was to better understand individual ideas whilst also identifying a collective aspiration.   People were asked: What makes up a good community? The example by Colin Ward was given, that being ‘ a great place to grow up’. People were also asked to complete the statement ‘If I could I would…’. This exercise brought out the following ideas:

PP’s research highlighted reinstating the carnival and building a new festival was an opportunity that had local meaning and complemented emerging activity. The aim is that the carnival will help create a sense of community pride while showcasing the many skills and resources available in the area through activities such as creative workshops and a procession. It was discussed that the carnival could:

Schools were identified as important to include in development of the carnival as children and young people are a great way of connecting people and offer a vested interest to improve lives and livelihoods.

To make the carnival a reality the group considered: what do we need to do to set up a carnival?, what are the themes?, who are the groups? and where are the connections? Additionally, gaining a stronger understanding of peoples’ needs and general demand for a carnival were identified as the first next steps.

CAP Step 3: What / who will get in the way of creating the carnival?

Managing constraints or issues which might stop the carnival developing is an interesting and creative part of the process. To these ends, constraints were themed with the group outlining a variety of issues. Examples include: institutional (health and safety regulations, road closures, policing event etc.), financial (lack of funding, skills not available to write funding bids etc.).

Additionally, a lack of public enthusiasm and willingness of people and organisations to take part in the project was identified as a potential risk – this is why it is so vitally important that the priorities and aspirations of the group are met in the preliminary stages of the project, as people will only get involved if their vested interests are being served. This may be because people’s concepts of what a carnival or festival  in Strichley would be are currently limited  – PP have recognised the need to widen that perception.(see below) 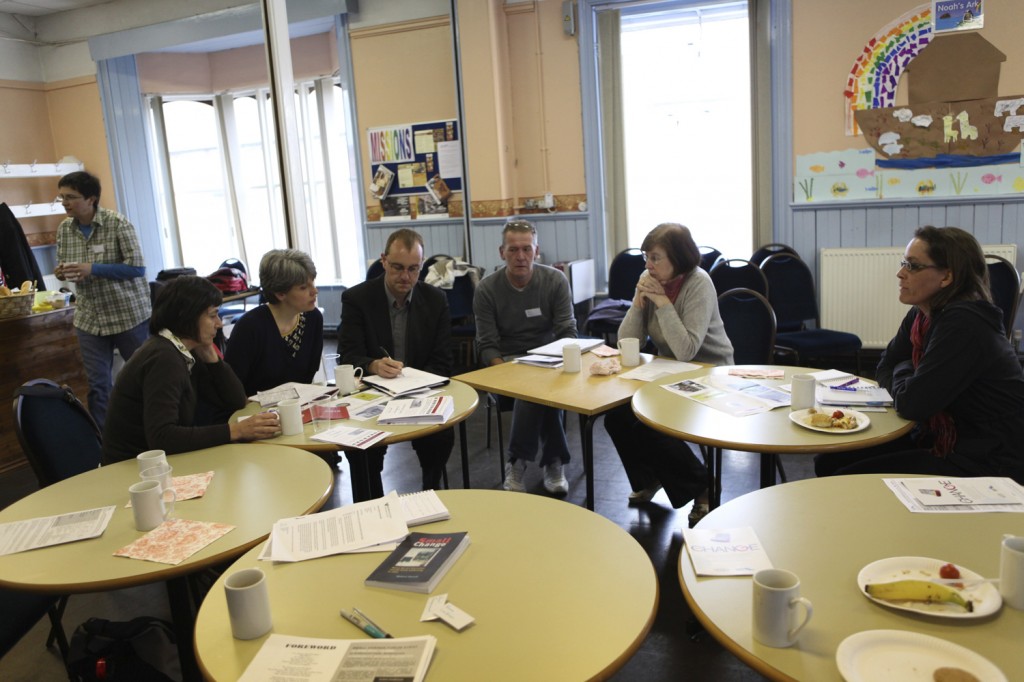 Step 4: what resources are required to create the carnival?

There is an abundance of resources and skills in the community which need to be identified. Required resources need defining and development of a strategy for mobilising these assets. Group and individual aspirations also need to be understood so that they become a useful resource for developing the project.

The discussion illustrated to PP that the opportunity for a creative-led event could be hampered by a rigid view of  what ‘carnival’ suggests.  As with the programme delivered by PP previously a strong creative proposition that is made in response to a particular context can result in extraordinary results – Love Stirchley a distinct project from the carnival proposition) being a great example. For PP the development of Viva Stirchley as a proposition is a creative process which, had they been further into its development when presented to the group, they feel they would have elicited a different and more positive response. As a result PP will be considering how best to develop, structure and ensure participation in the development of the carnival proposition in order to ensure the artistic quality and ambition can be sustained,

An Urban Resource Centre (URC) is a locally run flexible space providing residents with an place for workshops, local events and meetings while serving as a social hub. In Stirchley, there are currently a number of empty shops on the high street and an old swimming baths facility, owned by Birmingham City Council, which have the potential to be turned, in part, into a URC. Deciding the location for an URC will take time and negotiations, therefore, the group began by exploring ideas of ownership and belonging relating to setting up such a centre in Stirchley. They also examined what the legal, institutional and social constraints might be. Interestingly, it was discussed that the group itself could become the URC rather than a physical place. In this context, a virtual network could be a way of diverse groups and individuals subscribing to a collective identity.

Things to consider with regards to developing the URC:

Initial next steps for realising the project included:

The Stirchley event enabled the group to develop a clearer understanding of their aspirations for the area and what practical next steps are needed to realise several of the community improvement proposals. Further investigation is required to better understand:

In order to get this going the group needs to:

The conventional approach to initiate and implement a project within a community is to arrange a series of planning meetings which tend to be unimaginative and attract the ‘same old crowd’. The group decided it needed to add a new spin on this and provide something, which pronounced its ambition and need to make big changes in Stirchley. The concept of a summit was discussed as this shifts the perception, purpose and intent from a low level community meeting to an ambitious, bigger-scale event looking to find solutions and make change happen. The aim of the Summit would be to identify resources and explore the following plans:

By doing this the group will be able to:

The Stirchley Summit has now been organised as a result of this event and this will take place on 11 August.